Can you really have too much "Nick" genetics?

Can you really have too much of a good thing? I didn’t think so until one day I realized my Kiko herd’s family tree was pretty much one big limb from the Sunboy Stanton 149 “Nick” bloodline. I first used Nick, a Moneymaker son, in 2005. Thirteen years later, his bloodline still runs deep in the Egypt Creek gene pool.

It wasn’t an intentional strategy. I was just keeping the best bucks as replacement sires and I ended up with all Nick grandsons. But it all started with a couple of exceptional Nick daughters.

In 2008, in partnership with Bill and Brenda Moore, we flushed Hanky Panky to TAY Onyx semen. From that kid crop came BBM Hanky Panky’s Y266, born in 2009. HP, as we called him, served us well for many years and we have a supply of semen that we are using.

In 2010, Hanky Panky delivered a pair of buck kids sired by ECR Rusty. We kept one of those — ECR Rusty’s Rambo, who is still our senior herdsire at 8 years old.

In the meantime, little sister Nicki was busy having boys, too, and these have been too good to sell. At the moment, we have these Nicki sons in the buck pen:

• ECR Bunker and ECR Fort Knox, born 2018, sired by RDH Out of the Blue (an outcross that we nicknamed “Handsome”).

So, yes, we have four Nicki sons — for a total of six Nick grandsons in the lineup — two of them, Powerstroke and Rustnick, are double-bred Nick! We probably would have had another Nicki son, ECR Slash, born in 2016, but he disappeared and was presumed killed by coyotes.

This year I decided it was time to bring in some new blood to help Handsome bring some diversity to our genetics.

Earlier this summer I stumbled upon a buck that was owned and raised by Shane Hesterman of Deep South Kikos in Brooklyn, Miss. DSK Yukon is a 2016 buck that has a lot of old genetics close up in his pedigree — and nearly all are an outcross to everything on my ranch. Names like CPK Rooster Cogburn, ELH Blue Boy, WMB Sasquatch, AAS Goldmine I and Tasman Zorro. Plus he’s meaty and tough as nails. Shane has been culling hard ever since he started raising Kikos and Yukon is proof he’s doing it right.

We also acquired one of the 2018 flush bucks from  Kendell and Dana Barnes’ Chey-View Kikos in Winchester, Ky. He’s out of CVK June II and semen from performance-proven MGR Titan’s Hammer. We named him Hammerhead.

In this year’s West Virginia buck performance test, Hammerhead finished 9thoverall and one of his flushmates finished 12th. Their dam, June II, is out of  LRF Pango Hua and AVG June. This cross produced a Top 10 buck on the 2013 Maryland test.

We think these two new bucks, in combination with our Nick grandsons, will give us the genetics we need to move into the future. 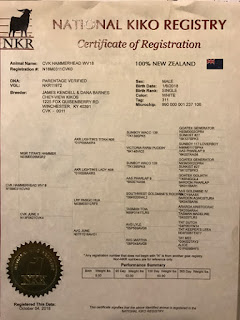 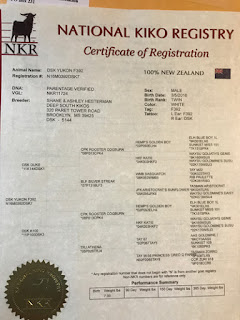 Posted by Terry Hankins at 4:49 PM No comments: