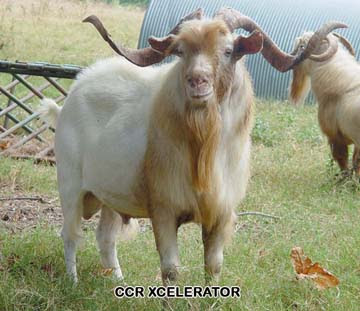 It was a sad day on Egypt Creek Ranch yesterday. We found Xcelerator dead in his pasture. It looks like he just fell over. The old boy had lived a good life and leaves a lasting legacy in the Kiko world.

CCR Xcelerator was born at Caston Creek Ranch near Poteau, Okla., on February 24, 1999. He was a son of Moneymaker. His mother was a Goats Unlimited doe, a daughter of 14/89, one of the first Kiko bucks brought into the United States by Dr. An Peischel.
I purchased Xcelerator in November 1999 from Steve and Sylvia Tomlinson while visiting their Caston Creek Ranch. I had gone there to purchase does, but this chunky little buck caught my attention, so I brought him home, too. In the early days of the Kiko industry, there was no distinction between purebreds and 100 percent New Zealands. They were all the same to most of us early breeders. So we just bred best to best, which resulted in Xcelerator (97%) being bred to many 100% does.
Not only was Xcelerator quick growing and muscular, he passed these traits to his offspring. One cross with a Goldmine II daughter produced the winner of the 2007 Oklahoma Buck Forage Test, ECR Meat Eater.  An Xcelerator son was the top-gaining Kiko at the 2004 Langston buck test and a grandson was the No. 1 gaining buck at the 2009 Maryland buck test.
Others liked his genetics, too, and proved it by consistently paying top dollar for his sons. ECR Ivanhoe was the high-selling purebred buck at the 2007 ECR production sale and ECR Sinbad was the high-selling purebred buck in the 2008 sale.
In addition to his production traits, Xcelerator was "pretty" with his long curling horns and bright, white sleek coat in summertime. His photo has been used in books and magazines to illustrate the Kiko breed. Of course he is incorporated into our ranch logo and his likeness appears on Kiko-related apparel.
Xcelerator retired from active duty when he was 8-years-old. He spent his remaining years in his own private pasture and shed and enjoyed 3 pounds of expensive senior horse feed each day. He died fat, happy and contented.

With decent rain last year and goat numbers down, some of our pastures became overgrown with Bermudagrass. The Bermudagrass makes up a large part of our goats' diet, although it is not their first choice. Some experts preach against Bermudagrass because its thick and dense nature helps it hold in moisture, which makes it the perfect environment for stomach worms. Here in the Deep South Bermudagrass is prevalent, so we have learned to live with it; there's not much way to kill it out.


About a month ago I told my son-in-law Stephen and his friend that they could put some of their horses in a large goat pasture where there were only six head of grown bucks spending the winter. I wanted the horses to tear up the Bermudagrass thatch and suck up as many worm eggs and larvae as they could.


I know it would be more profitable to use cattle for this job instead of pet horses, but the horses were readily accessible and didn't cost me anything.


It's about time to pull the horses off the pasture (and the bucks, too). Hopefully they have trimmed the pasture down enough to allow the new grass to pop up as the weather continues to get warmer. And since we didn't have much winter, maybe the worms will be set back some also.


Fortunately, worms are nowhere near the problem they were a decade ago. Better management and better genetics have all worked together to make goat raising a pleasant experience.

Posted by Terry Hankins at 2:10 PM No comments:

Taking this feral goat business a little too far

I've mentioned before that I like that feralness about my goats that helps them survive out in the pasture. The mommas know how to hide their young ones in the brush so they are not easy targets for predators. And somehow the babies know to stay there and be quiet.


We've all had great does that would go to the far edge of the pasture or in the woods to have her kids. Once they were born, she'd stay there for up to three days bonding with and nourishing her new kids. Then eventually she would rejoin the herd to show off her babies.


I have a lot of nannies that do that each year. I'll see them scattered all over the place at kidding season. I can see from a distance that they have babies, and usually I just leave them alone. I have a few older does that I keep in a pasture that comes right up to the barn. I give them a little feed each day to keep them coming around where I can check on them. One evening recently one of the does didn't show up, so I was sure she had kidded somewhere.


I went walking and found her and two beautiful buck kids on the edge of the woods several hundred yards and two hills away from the barn. She had them cleaned up and they had nursed, so I left them to continue their bonding. The next afternoon, the doe showed up at meal time, but didn't have her kids with her. I wasn't concerned because after she ate, she went back out into the woods.


She showed up again at meal time on the third day, but this time she didn't go back out. She just hung around the barn and called her babies, but no one responded. Finally I went walking to try and find the buck kids. They weren't along the trail to the barn, so I went all the way to where I had found them on that first day. I finally found a piece of a baby's leg. I'm guessing a coyote made a couple meals out of the buck kids during the few days after they were born.


Which brings me back to a doe's feralness — sometimes being reclusive can be deadly. I was more mad at the doe than I was at the coyote. 1. She should have had them hidden better. 2. She should have been more protective. 3. She could have brought them closer to the barn sooner.


And, of course, I was mad at myself. I could have picked up the kids and toted them home on that first day, but I have kids born far from the barn all the time. Or I could have had more guard dogs in the pasture. (I didn't have any dogs in this pasture because I'm short of good dogs right now and didn't think this little pasture needed an LGD.) Of course I've been thinking that for what those two colored New Zealand Kiko bucks could have sold for in a few months I could have bought two good dogs and fed them for a year. Oh, well, that's part of raising goats in the pasture.


Posted by Terry Hankins at 1:39 PM No comments:

In the midst of kidding season

The bulk of our kidding is over with only a few does left to come in. We had the nicest February weather ever and lost no kids to cold or freezing. As an example of how easy the kidding went (let me knock on wood before something goes wrong), here's how last Saturday went. I knew it would be a big kidding day but I slept in til 7 a.m. anyway. Then I had a pot of coffee, read my e-mails, watched the news and weather, and finally got to the pasture about 9. There were eight new babies: three sets of twins and two singles. I wrote them down in my little note pad. I spent the next few hours with my grandson Rylan. We ate lunch at the Longhorn Steak House (did you know they had a lunch menu on the weekend — we both ate steak for $32 total!), then we went and saw the movie Act of Valor. We went to the Malco DeSoto Cinema in Southaven, Miss., with the big recliner seats and super surround sound. This movie about Navy SEALS is great if you love the sounds of machine guns and helicopters. After the movie, Rylan and I went to the nearby Sonic Drive-in and got ice cream and a mocha latte'. We got back to the farm just as the sun was going down. We made a quick tour and found 11 more new babies. Everyone was cleaned up and nursing. I didn't get all of them written down in my notepad because it was getting dark and I couldn't get close enough to a couple does to see if they had boys or girls. We had a total of 19 new babies that day and no problems plus I spent some quality time of the oldest grandson. That's how kidding season should be all the time.


Posted by Terry Hankins at 1:42 PM No comments: